Artist Edward Hopper's painting Nighthawks (1942) is one of the most famous American works of art of the 20th century, providing an analytic and historical snapshot of 1940s American culture in a scene that seems to be taken straight out of a classic Hollywood film noir. What is the meaning of Nighthawks by Edward Hopper? 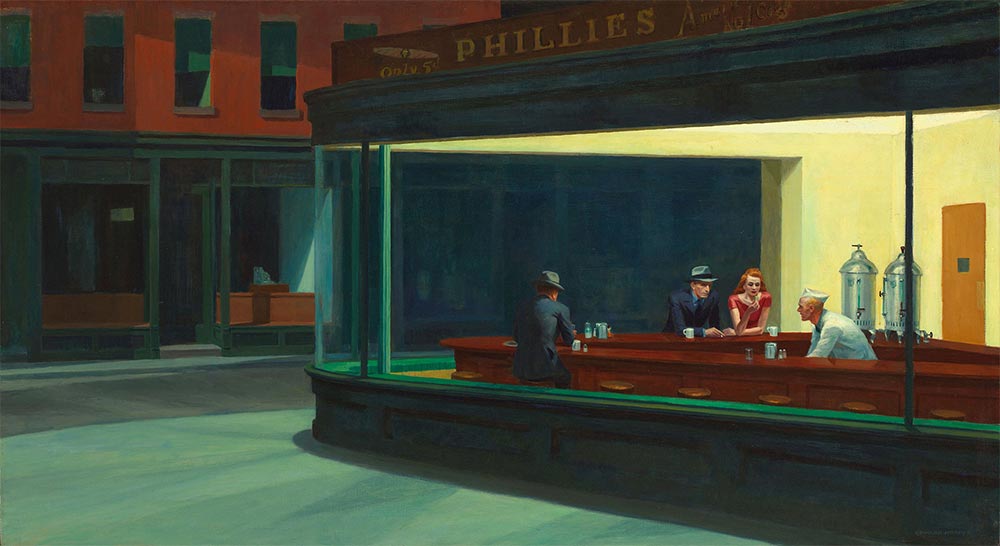 Edward Hopper's realist painting Nighthawks literally gives the viewer a look inside 1940s American urban culture from the outside. According to the artist, the diner in Nighthawks is based off a real restaurant located in Hopper's New York Greenwich Village neighborhood at an intersection "where two streets meet." In stark contrast with the dark streets outside, the harsh florescent lighting illuminating the inside of the diner had just become popular in the early 1940s, when Nighthawks was painted. In fact, diner culture did not become popular in the US until the late 1920s, finally allowing night owls and insomniacs like the assembled characters in Hopper's painting a place to relax and chat late at night, escaping the lonely city outside for a while.

What is Film Noir? Definition and Meaning

Released in 1941 just a year before Hopper's Nighthawks, The Maltese Falcon is one of the most famous examples of classic Hollywood film noir and based on a hard-boiled detective novel by author Dashiell Hammett. Like Hopper's Nighthawks painting, The Maltese Falcon is also named after a rare bird of prey: a silent, stealthy predator that fits in well with a classic film noir theme. While it may be just a coincidence, it seems likely that Hopper was subtly referencing the popular film noir trend through the Nighthawks title while also cleverly characterizing the tired looking people hunched around the diner counter. What else connects Hopper's Nighthawks to classic film noir style?

The two unassuming and professional looking men in Hopper's painting both fit the role of the classic film noir "private investigator," wearing dark suits and fedoras. Fedora hats were a staple costume item for Humphrey Bogart detective characters in The Maltese Falcon and another Hollywood film noir, The Big Sleep. Keeping with film noir tradition, Hopper does not forget to include the femme fatale in the Nighthawks painting, with his glamorous woman the perfect example of the seductive "Lady in Red," with red hair, red lipstick and a lowcut scarlet evening dress.

In addition to his familiar cast of characters, Edward Hopper sets the stage for mystery with a classic film noir scene. Streetlights, nighttime settings, dark street fronts, after hours city diners and eerily empty, deserted streets all fit well with a typical film noir setting. As in a classic film noir, in Nighthawks Edward Hopper sets the scene for action that doesn't seem to have taken place yet. Why does the artist include so much seemingly empty dead space outside of the diner? Hopper's striking composition choices cause the viewer to search for a story and meaning in Nighthawks. Will the conspicuously solitary man sitting alone, looking down at the bar suddenly stand and catch the couple seated across from off-guard, holding them at gunpoint? Will an unmarked car drive by in the street outside?

Just like a good film noir, Edward Hopper's painting Nighthawks pulls the viewer into the mystery, making us keep watching, waiting to see what happens next.

Artist Charles Burchfield is known for painting nature landscapes, but his uncanny house paintings of haunted houses with faces are some of Burchfield's most interesting art.