Guernica (1937) by Spanish artist Pablo Picasso is one of the most powerful anti-war paintings in history. A giant mural measuring over 11 feet tall and 25 feet wide, the message and meaning of Picasso's Guernica is not immediately clear and open to interpretation. What is the hidden meaning? An analysis of Pablo Picasso's dramatic painting reveals the importance of Spain, war and bullfighting in Guernica. 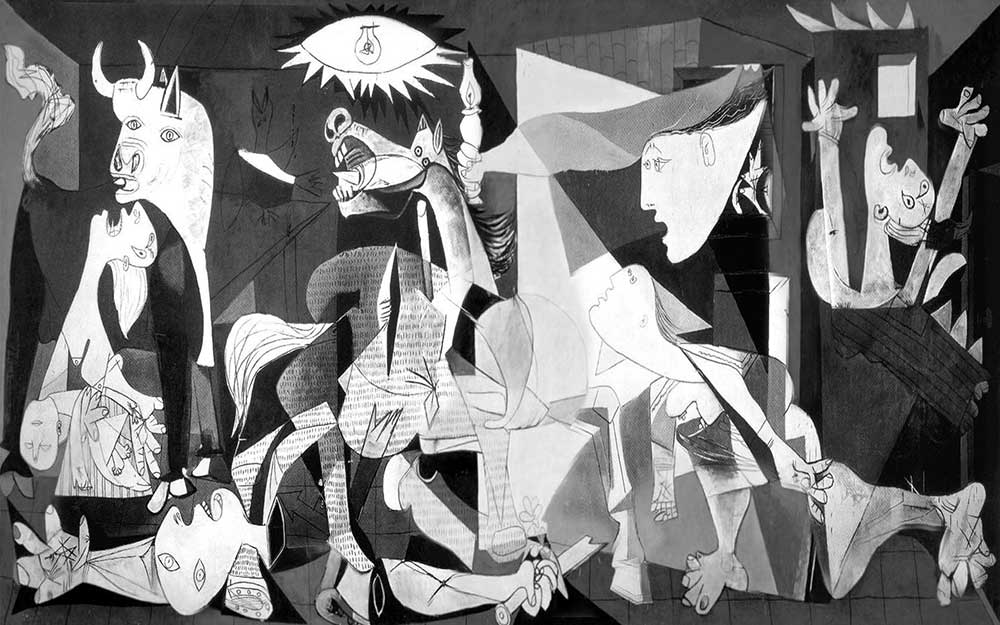 Guernica and Spain: Inspiration for the Painting

Picasso’s homeland of Spain is central to the meaning of Guernica. Although Picasso expatriated to Paris in 1900 and never did move back to Spain, the famous Spanish artist was commissioned to paint the mural on behalf of his country for the 1937 World Fair in Paris. Initially struggling to find inspiration for the important painting, it wasn’t until April 26, 1937 that Picasso was finally struck with the subject matter and ideas he would ultimately explore in Guernica. On April 26, a small Basque town in northern Spain was aerial bombed in a coordinated attack by Nazi Germany. The name of the town was Guernica.

At its most simple, Guernica is a war painting. Giant in its size and scope, the painting documents the pervasive and widespread devastation, death and chaos caused by war. While even amateur art history scholars enjoy analyzing the use of color in Picasso's Rose or Blue periods, in the monochromatic painting Guernica the predominant color is black, reminiscent of death itself. In fact, a hidden subliminal image of a human skull was recently discovered in the painting, a secret memento mori and symbol of death doubled into the horse’s snout.

Picasso painted Guernica in 1937, a time of political unrest in Spain and on a global scale. Considered by some to be a "dress rehearsal" for World War II, the Spanish Civil War was one of the most devastating conflicts in Spanish history, resulting in up to one million deaths by its end. The civil war started in 1936, just a year before Guernica was painted, and was fought between the status quo and the rebel Nationalists, who eventually won the support of Nazi Germany. To help the rebels secure victory in the Basque region, Germany began a series of aerial bombing exercises in the area, leading to the eventual attack on the small town of Guernica in April 1937.

The bombing of Guernica was controversial and seen by many as an unnecessary attack on civilians, even classifiable as an atrocity or war crime. In Picasso’s painting, we can see the effects of the bombing played out on civilian lives and communities: men, women, children and even animals and livestock. Guernica is filled with civilian victims, some living, some already dead. In the painting’s foreground, a corpse is sprawled supine and is surrounded on all sides by expressions of agony — anguished figures with hands thrown up, heads thrown back, kneeling, wailing. At the left, a mother clutches a baby who died during the bombing. Humans and animals are on equal footing in Picasso's Guernica, with the artist perhaps illustrating not only the simultaneous brutalization and dehumanization of humanity during wartime, but also the base, animalistic response that all living things, animals and humans, share in the face of fear and death.

Is Guernica a Cubist painting? In Guernica, the chaos caused by the bombing reverberates through the fractured composition of Picasso’s painting. In many ways, the fragmented scene of broken geometric shapes and flat faces is reminiscent of Cubism, the art movement Picasso helped create in the early twentieth century. 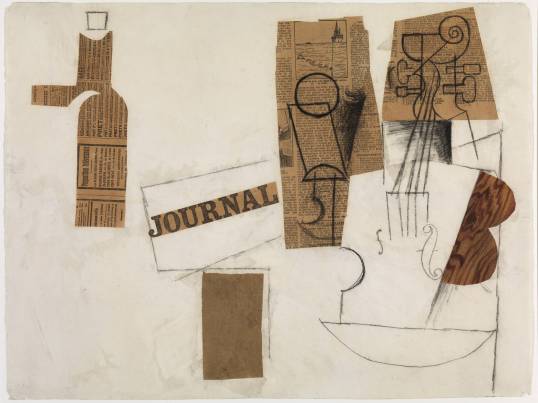 Guernica is an oil on canvas painting, but the black and white print covering the body of the horse suggests texture and collage, and appears almost like a newspaper print overlay. While this hint of newspaper print may speak to the very current “pulled from the headlines” subject matter of the painting, it may also be a throwback to Picasso's early "Journal" Cubist artwork, such as Siphon, Glass, Newspaper, and Violin from 1912. Along with its echoes of Cubism, Picasso was most likely referencing another very famous Spanish artist, Francisco de Goya, who often painted images and scenes of war. Here we can further appreciate the wide scope of Guernica, with Picasso drawing from every resource he had, including his own art and the work of other influential Spanish artists, to compellingly and effectively convey the magnitude of his tragic, almost surreal, masterpiece.

The Hidden Meaning of the Bull in Guernica

What is the meaning of the bull in Guernica? When asked to interpret the many images and symbols included in his painting, Picasso famously said, “The bull is a bull.” The bull is a very meaningful symbol in Spain, and for Picasso as an artist. As the national animal of Spain, the bull is an icon of the nation itself. In the early 1930s, the minotaur, a mythical beast that is half man and half bull, was a recurring subject in his art that Picasso seemed to personally identify with. The minotaur figure appeared in multiple paintings by the artist in the years leading up to the painting of Guernica.

"The bull is a bull." Pablo Picasso

Bulls also play an important role in bullfighting, a traditional sport in Spain. The Spanish poet Federico Garcia Lorca once said, “Spain is the only country where death is a natural spectacle.” Bull fighting was more than just a national pastime for Picasso as well. The artist was born in the Andalusian city of Malaga, the ancient home of bullfighting. Do bulls and bull fighting influence the meaning of Picasso's painting Guernica?

While Guernica is obviously recognized as a war painting, it also includes symbols — a bull, a horse, and a man with a sword — that commonly appear in traditional Spanish bull fighting art. In his later art and sketches, Picasso also painted traditional bull fighting art himself, as in Tauromaquia (1957). 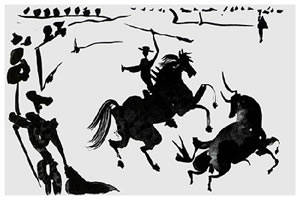 But Guernica does not depict the bullfighting scene you might see in traditional Spanish art or in Picasso's later work. Rather than showing a victorious matador bowing to the crowds before a slaughtered bull, in Guernica the once heroic fighter, perhaps a symbol of civilization and humanity, lays defeated in the foreground. The sword or spear he might have used to slaughter the bull is broken off in his hand. Often used as a classic symbol of justice, the sword here is importantly broken, suggesting the unjust and atrocious nature of the attack. Like his fallen master, the matador’s horse also seems to be fatally injured, wailing in despair. What is the meaning?

What about the bull? The other figures and the entire composition of Guernica seem to look toward the bull, a silent spectator and oddly peaceful center for the painting standing stoically on the left side of the canvas. Like the minotaur, Picasso may have personally identified with the bull figure in Guernica. But the bull, like the artist who painted him, can provide no answers. As the painter, Picasso can only shed light and bring attention to these events. This is symbolized through the hovering candle or torch and the shining light included at the top of the painting.

Unlike the fallen matador, the bull still remains standing. As the most calm and resilient figure in the painting, the bull is, to quote Picasso, simply a bull — a symbol of Spain itself, the country still standing after a brutal attack. A hopeful figure in an otherwise bleak scene, the bull symbolizes the virile spirit of the people and the nation that Picasso hopes will ultimately endure even through acts of violence, war and destruction.

What is the hidden meaning of the painting Guernica by Pablo Picasso? With the obvious importance of the bull and Picasso’s personal connection to his homeland, it might seem easy to write off Guernica as a painting with a simple nationalist message. But the meaning of Picasso’s Guernica transcends Spain. While many of its symbols and images are pulled from traditional Spanish history, art and culture, the painting has evolved into a universal anti-war icon of peace and pacifism. Guernica lives on today as one of the most famous and powerful war paintings in history and has even been commemorated in tattoo form by celebrities like Kristen Stewart.