Disclaimer: this article is first and foremost clickbait. Read at your own risk.

â€Is Bradford Cox gay?â€ Sounds like a pretty straight forward question, right? Wrong. It might make sense that you canâ€™t get a simple yes or no answer if the celebrity in question hasnâ€™t come out of the closet yet. But itâ€™s not like Bradford Cox, the lead singer of Deerhunter, hasnâ€™t talked openly about it in numerous interviews. In fact, Bradford Cox himself has done more to confuse the issue than perhaps anyone else, every year seemingly throwing out a new loaded word to describe himself and who he really is. So is Bradford Cox really just a skinny gay anorexic asexual virgin?

Is Bradford Cox Anorexic? Does He Have a Disease? He's So Skinny... 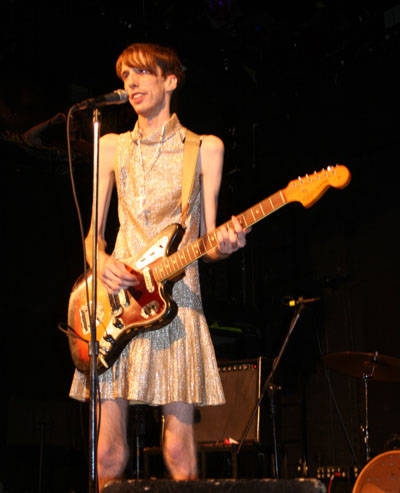 While itâ€™s hard to be sure if Bradford Cox is gay, one thing is for sure: he is definitely skinny. While Bradford Cox won't admit to being anorexic, Bradford Cox has spoken openly about being diagnosed with Marfan Syndrome, a disease that contributes to his very skinny and tall frame. Even though the disease probably makes it difficult for him to gain weight, not everyone diagnosed with Marfan Syndrome is as skinny as Bradford Cox, and he has been public about admitting that he has a poor â€œbody image.â€ Itâ€™s not uncommon for those suffering from both anorexia and another illness (often Crohnâ€™s Disease or IBS) to blame their low body weight on the more "socially acceptable" sickness to hide an eating disorder.

So is Bradford Cox gay or straight? Letâ€™s look at some interviews to see what the Deerhunter lead singer says about his orientation. In a 2008 Spin interview, Cox seemed to come out of the closet when he was quoted as saying, "I'm a 26-year-old gay virgin who eats barbecue and watches Braves games." It seems like the story might end there, but does it?

In that 2008 Spin interview, Bradford Cox seemed to be making it pretty clear he was gay, but when you look at the quote more closely, it almost seems like heâ€™s trying to prove just how ambiguous his orientation really is. Heâ€™s gay, but he likes eating fattening foods (maybe heâ€™s not anorexic after allâ€¦) and watching sports like a straight guy. So waitâ€¦is Bradford Cox straight? In an Atlas Sound interview in 2009, Pitchfork asked Cox point-blank if he was gay or at least bisexual, and Cox replied, â€œI am asexual. A-sexual.â€

Is Bradford Cox a Virgin?

The â€œasexualâ€ moniker continued to pop up in following Deerhunter interviews, along with another hot button word: â€œvirgin.â€ For a while there, it seemed like Bradford Cox was keeping a yearly log of his current status and orientation. Last year he was a â€œ25-year-old virgin,â€ this year he was a â€œ26-year-old gay virgin.â€ How do we keep up?

Bradford Cox of Deerhunter seemed to be OK with describing himself as an asexual virgin until 2013. In a recent 2013 interview with Rolling Stone, Bradford Cox said, â€œFor a long time I just said I was asexual, but now I just realized thatâ€¦ I'm still, I guessâ€¦ I mean, I'm queer.â€ Finally shrugging off the â€œasexualâ€ descriptor, itâ€™s starting to make more sense why Bradford Cox has recently made some negative comments about Morrissey, who is one of the only other indie music stars to publicly describe themselves as â€œasexual.â€ The process of Bradford Cox coming to terms with his orientation had to come full circle. In fact, Bradford Cox is making his film debut playing Jared Leto's gay lover in the upcoming movie Dallas Buyer's Club. So Bradford Cox is gayâ€¦right?

Some of the lyrics on Parallax and Monomania are more openly homosexual in their meaning than on past work. In the lyrics of Monomania's "THM," Cox almost seems to be talking about his own personal struggles with the peer pressure confusing his own orientation when he sings, "I tried to keep him straight since the day he was born. He came out a little late..." In the lyrics of the album title song of Parallax, Cox seems to be describing a romantic relationship with a man: "He gave me pain, gave me bruises. After the first time, the muscle loosens." To be fair, these lyrics are ambiguous, though, as Cox could also be singing from a female perspective, a role Cox seems to reprise again on the new Deerhunter album through the character of "Connie Lungpin." There are a lot of subtle but still readable indicators that Bradford Cox is growing more comfortable being gay on Monomania, especially when he quotes Queen's flamboyant Freddie Mercury on "Dream Captain." "I'm a poor boy from a poor family," he sings, reworking some of the most famous lines from "Bohemian Rhapsody." But what is the meaning behind those final lyrics on â€œPunk (La Vie AntÃ©rieure)â€: â€œFor a year, I was queer. I had conquered all my fears. Not alone anymore, but I found it such a boreâ€¦â€ Why is Bradford Cox using the past tense in this new song and insinuating he isn't gay anymore? Hasnâ€™t he come out and officially said that he was gay? Is he just trying to keep us guessing?

So is Bradford Cox just a skinny gay anorexic formerly asexual virgin? While some people might be annoyed by Deerhunterâ€™s lead singer for being so wishy washy about his orientation and personal life in general, itâ€™s starting to look like Bradford Cox knows exactly what heâ€™s doing and knows that changing his story and not letting people know his end game will cause more media attention and ultimately get more people to buy his Deerhunter and Atlas Sound albums. We can't know once and for all whether or not he is gay, because Bradford Cox is obviously very good about keeping people guessing, not only about his self image, but also about what heâ€™ll try next in his awesome indie music. Next up: Is Sufjan Stevens Gay, Married or Christian?