Artist Charles Ephraim Burchfield (1893-1967) may be most famous for the whimsical watercolor nature art of his later years, but some of the American Regional artist's most intriguing work are the house pictures from his early period. While Burchfield's most famous art usually focuses on vibrant springtime landscapes, nature still plays a fierce role in his uncanny house paintings, with ominous cloudy skies and bad, winter weather threatening his strangely lit and seemingly haunted houses that almost seem to have faces. 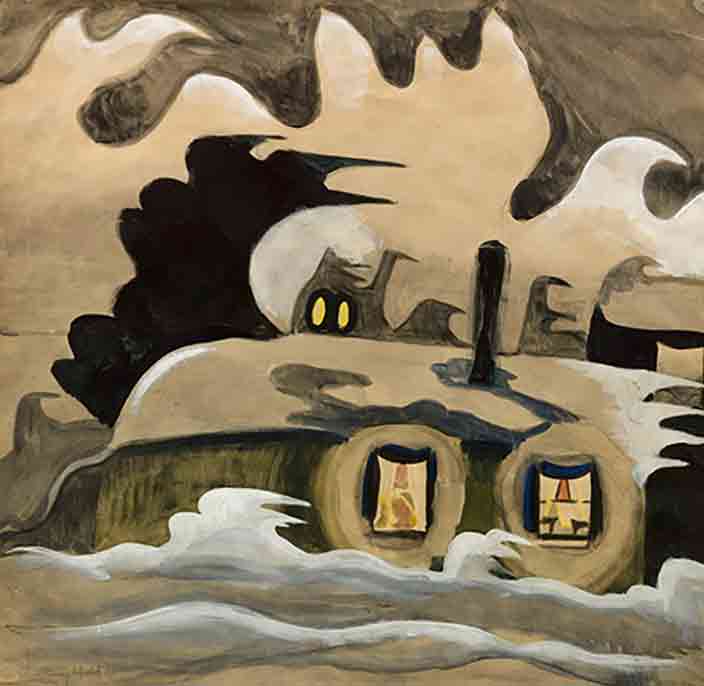 Almost all of the Burchfield house pictures share a similar dreary winter color palette. Keeping with a traditional "haunted house" theme, Burchfield uses sour, almost smoggy colors like brown, gray, black and yellow in many of his house paintings, most of which seem to be set around twilight or dusk, an in between time of day sometimes referred to as the "witching hour." 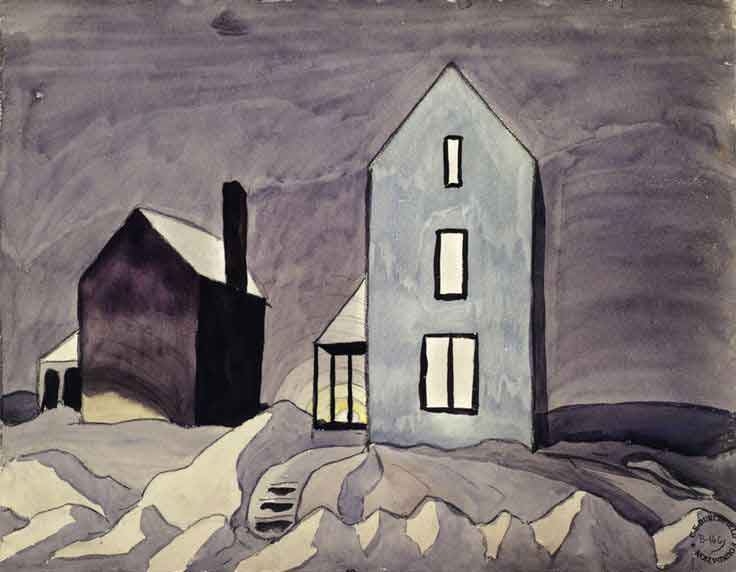 Bleak skies and stormy weather are another common and expected feature in Burchfield's seemingly haunted house pictures. While house art like Gray House (1920) and Two Houses (1920) are set before eerily still opaque winter skies, raging storms and heavy rain clouds characterize Burchfield's scariest and most expressionistic house paintings. The East Wind and Night Wind, both painted in 1918, are aptly set on a dark and stormy night. 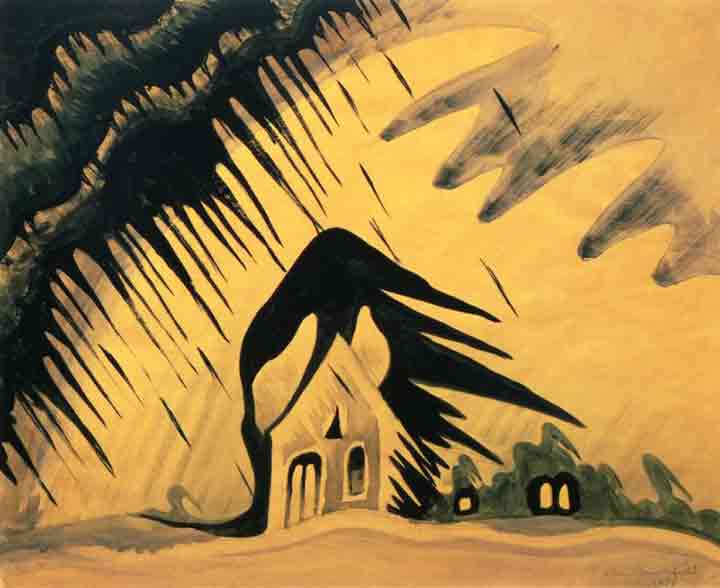 Charles Burchfield continued to be captivated with painting his house pictures after he married, relocated and settled down in Buffalo, New York, an area booming with industry and commerce in the early twentieth century. The smoggy yellow twilight sky and ominous jagged black clouds overwhelm and almost smother the houses, suggesting bad weather or perhaps even the toxic byproducts of industry as an external threat to the life inside these homes. While the threat may come from the outside, the inside of Burchfield houses aren't exactly inviting, either.

The weather outside may indeed be frightful, but Burchfield's houses look pretty scary, too. In paintings like Corner Store (1918), the uncanny houses almost seem to be alive and anthropomorphic, exhibiting human characteristics through what look like eyes, mouth, and faces. In Burchfield's paintings, many of the windows look like eyes, making these houses appear more soulful and even haunted, as though the buildings are predators watching stealthily from their hiding place behind the sidewalks. In the discreetly threatening house picture February Thaw (1920), Burchfield even paints the white eaves of the house to look like a mouth with bared teeth and jaws opening wide to devour. 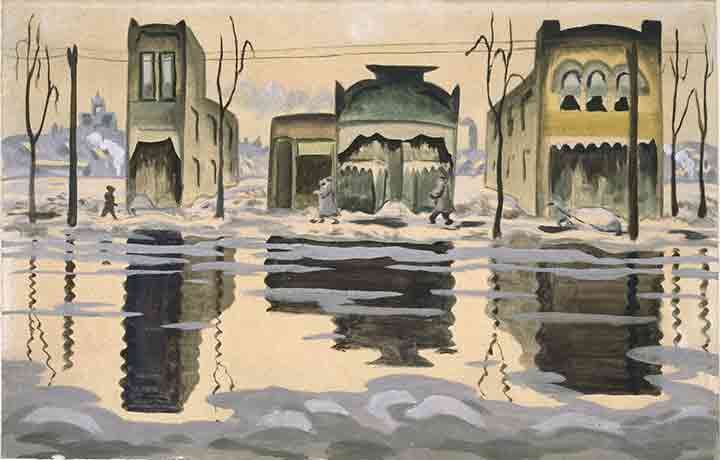 While Charles Burchfield is not the first artist to paint houses with faces, his haunted houses also possess a strange depthlessness and eerie elasticity not usually attributed to houses in paintings. In The East Wind (1918) and in a later painting The Builders (1931), Burchfield draws the house front alone, leaving the home without depth or space, perhaps continuing on invisibly into infinity like the uncanny house in Mark Z. Danielewski's postmodern novel House of Leaves (2000). While those houses are depthless, the buildings in Corner Store and Night Wind, are framed with stretchy, distorted dimensions, and almost seem to be pulled toward some unseen magnetic force. All of these qualities make Burchfield's houses seem haunted and, come to think of it, definitively unheimlich, or uncanny. 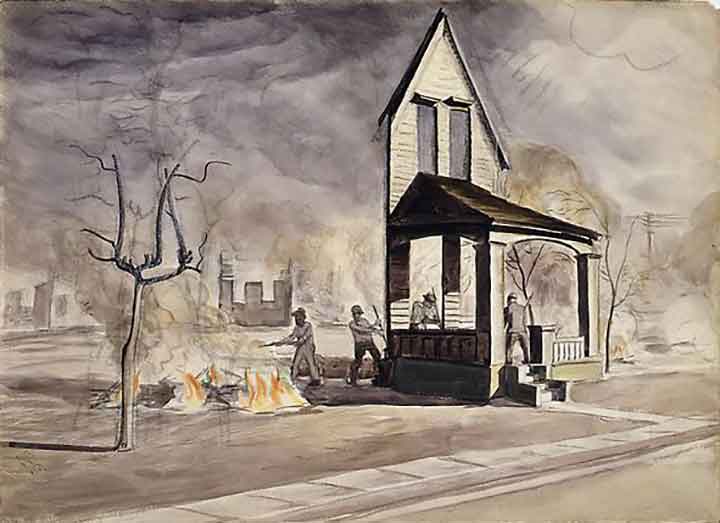 Burchfield's houses definitely seem haunted, but his houses are also definitively uncanny, or unheimlich in German. In his famous essay "The Uncanny," famous psychoanalyst Sigmund Freud defines "heimlich" as essentially being synonymous with "homelike," or that which simply "belong[s] to the house." However, according to Freud, that which is heimlich is exactly that which has the capacity to become unheimlich:

Among its different shades of meaning, the German word heimlich exhibits one which is identical with its opposite, unheimlich. What is heimlich thus comes to be unheimlich." Sigmund Freud, "The Uncanny" (1919)

A haunted house is by definition unheimlich because it was once homey and could be again, but for one reason or another its homelike qualities have morphed into something subtly disturbing and unwelcoming. Freud's Uncanny essay was published in 1919, right around the same time that Charles Burchfield started painting haunted houses with faces in his art. Is it possible possible that Freud's essay inspired Burchfield to paint these uncanny houses? The Burchfield houses look like homes, but on closer look there is definitely something a little haunted about them.

The wooden Dala horse (also known as a Dalecarlian horse) is an example of Swedish folk art, but what is the meaning and history behind these painted carved toy horses from Sweden?