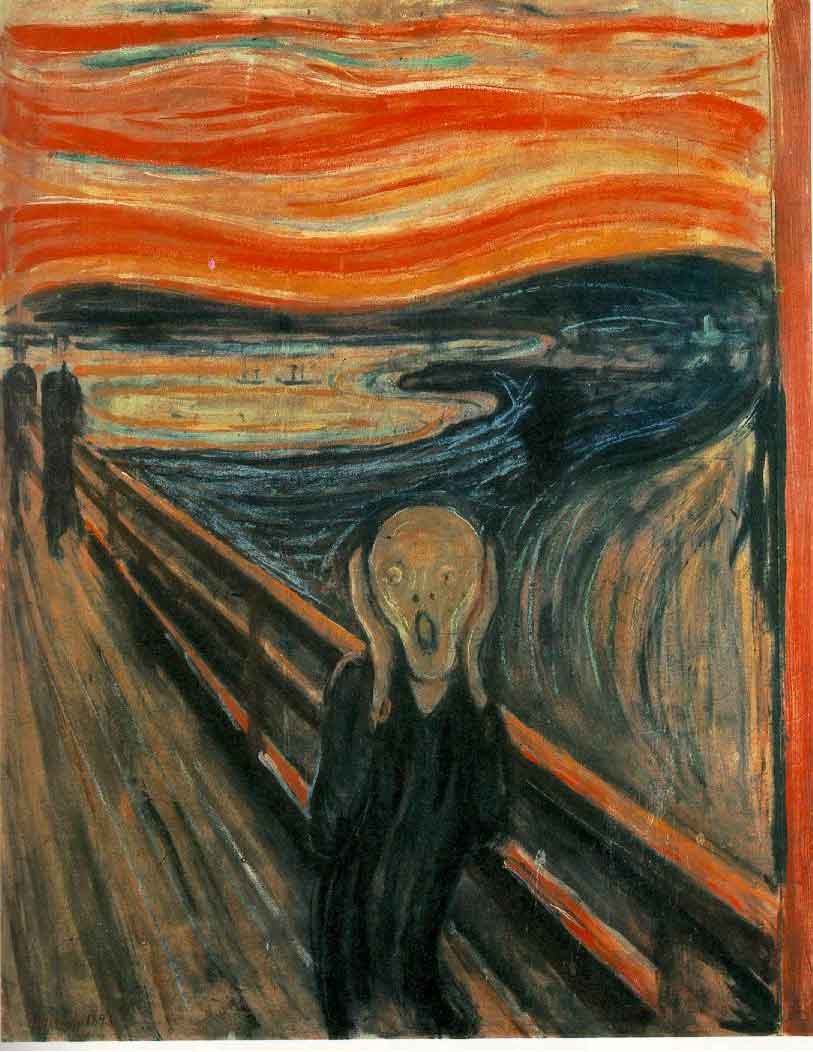 The Scream (1893) was painted by Norwegian artist Edvard Munch at the end of the nineteenth century during a unique transitional period in art history, often referred to as the fin de siècle. Prior to this time, artists were interested in painting their subjects as objectively as possible as, in the days before cameras and photography were mainstream, an artist's technical skill played a role in determining their commercial success. By the end of the nineteenth century, brave and forward-thinking painters like Edvard Munch were less interested in showing off their technical skills and more inclined to use their art to express inner thoughts, feelings and emotions instead, often by painting with brighter, more exaggerated colors and simpler shapes and compositions. Though largely disliked by art critics and considered too radical in their time, artists like Munch and even Vincent Van Gogh set the scene for Expressionism and the even more progressive modern art movements of the twentieth century.

Real life location of The Scream in Ekeberg, Norway

The Scream by Edvard Munch: a Personal Modern Art Analysis

What is the meaning and story behind The Scream? As was the case for many modern artists, for Munch the meaning of The Scream was profoundly personal. In some ways, only Edvard Munch could have painted The Scream. The real-life setting of the painting has been identified in Ekeberg, Norway, not far from where Munch grew up and lived. In fact, scientists have recently discovered a rare natural phenomenon that occurs only every few years in the skies over this geographic area of Norway that may account for the spectacularly vivid red sunset captured in Munch's painting. Did Munch witness this freak natural occurrence himself and immortalize it in The Scream?

The Scream takes place on the side of the road on top of Ekeberg Hill, looking out on nearby Oslo. The winding path with its recognizable guard rail offered a scenic view of the city and water, and was also a popular spot for local artists like Edvard Munch to paint. While the landscape obviously held individual meaning for the artist who frequented the area, the painting's themes and emotional content are also intensely autobiographical and closely inspired by a poignant personal experience first recorded in Munch's now infamous 1892 diary entry:

"I was walking down the road with two friends when the sun set; suddenly, the sky turned as red as blood. I stopped and leaned against the fence, feeling unspeakably tired. Tongues of fire and blood stretched over the bluish black fjord. My friends went on walking, while I lagged behind, shivering with fear. Then I heard the enormous infinite scream of nature." Edvard Munch

Interpretation of Munch's The Scream: The Painting & Diary Entry

In this famous quote and diary entry, Munch describes what initially sounds like a relaxing summer evening in Norway, taking a leisurely walk at dusk with some friends by the water. While watching a vivid sunset might seem like a calming and enjoyable thing to do, for Munch this simple outing turned into a haunting moment of extreme existential crisis and dread. In what sounds like a panic attack, Munch is overwhelmed by feelings of exhaustion while also struck by an almost violent wave of anxiety. Though intense, Munch's experience was a lonely, mostly internal struggle, as his two friends walk on without him, unaware of the artist's upset.

While Munch poetically describes his struggle with words in his diary entry, his unique artistic style and technique add new layers to the meaning and experience of The Scream as a painting. In the manner of an Expressionist, Munch uses brightly saturated, contrasting colors and bold strokes to express his chaotic emotional state in that moment. In his diary entry, Munch also evokes colorful, painterly language to set the scene: the sky above is "red as blood" in stark contrast with the "bluish black fjord" below. His language clearly translates into the composition of the painting. In what he referred to as his "soul painting," Edvard Munch shares a stripped down, honest and perhaps even ugly portrait of his inner feelings and anxiety, putting more importance on personal meaning and truth rather than on technical skill or "beauty," another traditional goal of art.

"Then I heard the enormous infinite scream of nature."

The Scream Meaning: Where is the scream of nature coming from?

At the end of the diary entry, Munch importantly hears "the enormous infinite scream of nature" from which the title of the painting derives. In fact, the painting’s original German title was Der Schrei der Natur, translated into English as "The Scream of Nature." In the painting, the subject's mouth and face are pulled into the very recognizable shape of a scream, but Munch explicitly tells us that he heard the scream. Importantly, he does not say that he actually screamed out loud. Is this primal scream really coming from the person portrayed in the painting or is it external and coming from somewhere else?

Where does this "enormous infinite scream of nature" originate? Munch plainly tells us that the scream comes from nature, the landscape so vividly brought to life in the painting. In his diary entry, Munch even uses mouthlike imagery to describe his surroundings. Is it in fact the sky, with its "tongues of fire and blood," that howls in Munch’s painting? Like Van Gogh's Starry Night, the sky of The Scream seems to almost come alive and move as a twirling whirlpool of feeling and emotion. In Munch’s painting, the strong colors and gestures of the sky and water swirl together as a combined force, with the person in the foreground seemingly overwhelmed by it and pulled into the eerily sentient background.

Why is the landscape of The Scream so threatening? Munch's repeated use of the word "blood," in combination with the twirling and whirling warm tones of the sanguine sky, suggest a physical, external threat. But what is the source of this violence? This may come back to the painting’s real-life setting in Ekeberg. While the site is indeed picturesque, art history scholars have discovered that a slaughterhouse was located within earshot of Ekeberg Hill at the time of The Scream's painting. Was the nearby slaughterhouse the source of the "scream of nature" and "blood" that Munch describes so vividly in his diary entry? Perhaps the scream Munch heard was the haunting distant cries of the dying animals at the slaughterhouse.

Edvard Munch: The Anxiety of the Expressionist Artist

The slaughterhouse may not be the only source of anguish in The Scream. Like Van Gogh, Munch struggled with anxiety and insanity throughout his life — both on an individual level and through his family. In fact, Munch's mentally ill sister was hospitalized at the time The Scream was painted in 1893. Along with the slaughterhouse mentioned above, the mental asylum where Munch's own sister stayed was also located close by, near the bottom of Ekeberg Hill. Was the scream Munch heard actually coming from the psychiatric hospital? The true meaning behind The Scream may come back to the haunting cries of living beings, animals and humans alike, undergoing both physical and emotional suffering in the modern world.

The Scream: Screaming Man or Woman?

Who is the person portrayed in The Scream? Munch's words suggest that the painting is a self-portrait of the artist himself. But is the person in the painting really Edvard Munch? Based on photographs available of the artist, it doesn't really look like him. While the artist’s experience by the fjord may have inspired The Scream, the hairless, almost fetal person in The Scream painting is unidentifiable as male or female and has a nondescript, gaunt, and skull-like face. Is it a man or a woman? Someone young or old? You or me?! The sexless, anonymous person depicted in The Scream may be Munch, or it may be Munch's sick sister, hospitalized in the asylum nearby. In fact, it really could be anyone…

The Scream Meaning (1893) by Edvard Munch

What is the meaning of Edvard Munch's 1893 modern art painting The Scream? When it all comes down to it, a "scream" is above all a sound — a physical, auditory experience. The screams of dying animals at the slaughterhouse and the cries possibly overheard from the nearby insane asylum add a moving, personal layer of meaning to the painting's simple title. Was Munch's "scream of nature" a haunting mix of all of the above? While the painting has obvious autobiographical and personal significance for Munch, one reason why The Scream painting is still so famous even today is because it is so universal in its meaning. The Scream has evolved into a symbol of modern existential crisis for everyone who at times feels lost, stressed, or threatened by their own thoughts and past. Anyone can look at The Scream and feel something.