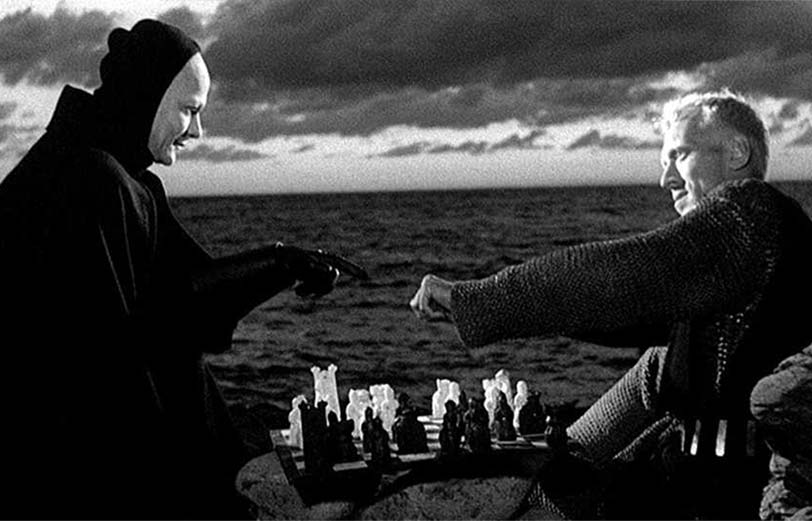 Why are symbols of death so important to an in-depth film analysis of The Seventh Seal? The film is set in Sweden during the time of the Black Death or bubonic plague, a highly contagious disease that caused the death of up to one-third of Europe's population. Allegories and symbols of death (sometimes referred to in art as memento mori, or reminders of death) in art grew more popular during this time when all members of Medieval society were keenly aware of mortality and feeling powerless over their lives and circumstances, much like the knight in The Seventh Seal.

The skull is one of the most popular memento mori symbols employed in art, often showing up in paintings by Rembrandt and other classic artists. Ingmar Bergman references memento mori most clearly through the church painter who seems preoccupied with painting "reminders of death." When asked about his fixation on painting morbid subject matter, the church painter explains that he makes art about death "to make people think" and claims, "A skull is more interesting than a naked woman."

"A skull is more interesting than a naked woman." The Seventh Seal 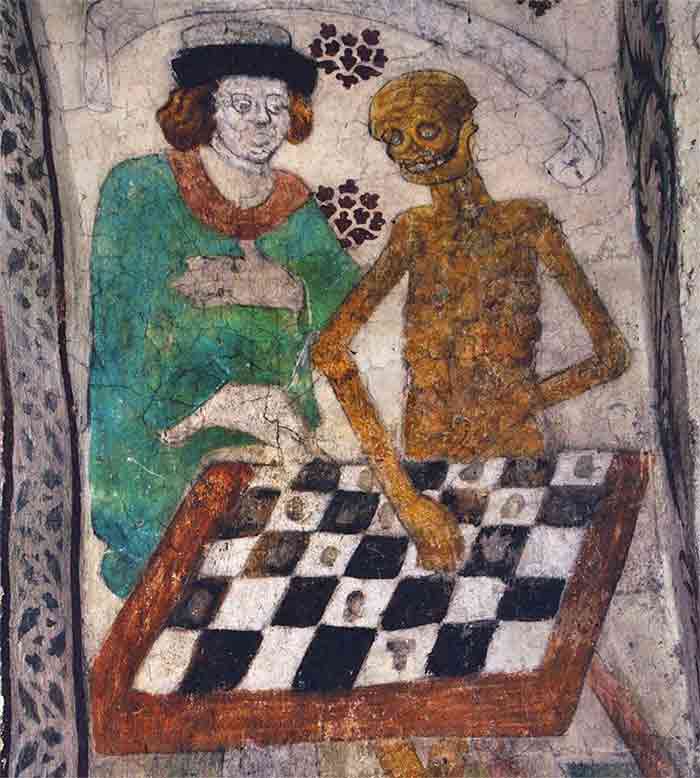 Ingmar Bergman's film The Seventh Seal is perhaps most famous for the scenes where the disillusioned knight Antonius Block plays chess with Death, traditionally personified in the movie as an eerie pale man often holding a scythe and wearing the typical black robe and cowl. The "Grim Reaper" character has appeared in art for centuries, but one of the first appearances of the symbol of Death Playing Chess in art can be traced back to Albertus Pictor's 15th century medieval painting Death Playing Chess (top right) found in a Swedish Catholic church in Taby county, in Upsalla just north of Stockholm. As a Swedish film director, it seems likely that Ingmar Bergman specifically referenced Pictor's church painting, and even introduces an artist painting the Dance of Death allegory in a Catholic Church perhaps as an homage to that painting.

"...So you play chess with Death?" The Seventh Seal

What is the meaning of the Death Playing Chess art allegory? The game of chess is all about outwitting your opponent, so this chess-death allegory speaks to a society's desperate and futile attempts to prolong life and avoid Death by any means necessary, whether wearing a plague doctor mask for protection or turning survival into an intellectual game of strategy that could be won if only "played" correctly. "How can you outwit Death?" Death asks in The Seventh Seal, disguised as a priest. The knight understands that trying to outwit Death is absurd but, like the nobleman in Pictor's painting, keeps trying to checkmate Death nonetheless.

Analysis of the Dance of Death in The Seventh Seal

Along with Death playing a game of chess, the danse macabre, translated from the French as "Dance of Death," is another symbol of death in art that is central to the meaning of Ingmar Bergman's movie The Seventh Seal. Since life is an ongoing game of chess with Death in The Seventh Seal, it is fitting that the film ends with the danse macabre, or inevitable surrender to Death.

Dance of Death in The Seventh Seal

Dance of Death and Danse Macabre Meaning in Art History

What is the meaning of the danse macabre in art history? Bernt Notke's fifteenth century church painting Danse Macabre (above) is just one famous depiction of the traditional "Dance of Death," an allegory and memento mori meant to remind humanity that Death unites us all. As Notke's interpretation reveals, Death is inescapable whether you are a princess, a king or a knight. Keeping with traditions of art history visible in vanitas paintings, in The Seventh Seal Bergman also shows us that we can't buy our way out of Death either - we see what happens to Raval, the man stealing gold and silver from victims of the plague. As Death himself states in Bergman's The Seventh Seal, "No one escapes me," regardless of station or rank. The last scene of The Seventh Seal (above) is the director's cinematic take on the danse macabre, showing "all" of the characters united in a sad dance with Death leading them away holding an hourglass, a symbol of time very popular in memento mori and vanitas art.

"I see them! Over there against the stormy sky. They are all there. The smith and Lisa, the knight, Raval, Jans, and Skat. And the strict master Death bids them dance. He wants them to hold hands and to tread the dance in a long line. At the head goes the strict master with the scythe and hourglass. But the Fool brings up the rear with his lute. They move away from the dawn in a solemn dance towards the dark lands while the rain cleanses their cheeks from the salt of their bitter tears." The Seventh Seal

Doubt, Faith & Meaning of the Title in Ingmar Bergman's The Seventh Seal

Memento mori, ars moriendi, vanitas, danse macabre, skulls and other symbols of death in art are meant to remind humanity of the inevitability of death and also teach how to die gracefully. In Ingmar Bergman's movie The Seventh Seal, the knight likewise gives in to Death, broken down by God's silence and invisibility. The importance of God's silence to the meaning of The Seventh Seal and the movie title is indicated through the Bible verse quoted at the beginning and end of the film: "When He broke the seventh seal, there was silence in heaven for about half an hour" (Revelation 8:1). Doubt in the face of God's silence is a theme that recurs again and again in Ingmar Bergman's later films, including Winter Light, Through a Glass Darkly, and most notably The Silence.

What is the meaning of Stanley Kubrick's 1999 movie Eyes Wide Shut? Plague doctor masks and the infamous party scene unlock the film's many hidden meanings.

The wooden Dala horse (also known as a Dalecarlian horse) is an example of Swedish folk art, but what is the meaning and history behind these painted carved toy horses from Sweden?